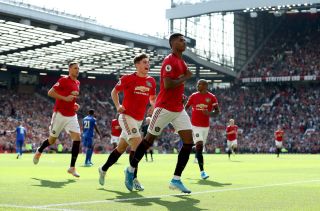 Marcus Rashford ended Manchester United’s penalty curse and got Ole Gunnar Solskjaer’s injury-hit side back to winning ways as Leicester’s unbeaten start to the season came to an end.

A number of onlookers made the Foxes favourites for their Old Trafford reunion with Harry Maguire given the way Brendan Rodgers’ side have impressed in the early weeks of the campaign.

United have dropped points and that form was compounded injury issues, but the world’s most expensive defender helped his new employers keep a rare clean sheet on an afternoon when Rashford’s early penalty proved enough to secure a 1-0 win.

Maguire got a hard time from the Leicester fans, who coined a song belittling their former hero and singing the praises of Caglar Soyuncu – a man who may have stepped up admirably this term but cost his side in the north west.

The Leicester defender caught Rashford in the box and the United forward dusted himself down to send Kasper Schmeichel the wrong way.

It was a cool finish that helped atone for his penalty miss in the loss against Crystal Palace and his much-debated discussion with Paul Pogba before the World Cup winner’s spot-kick attempt was saved in the draw at Wolves.

It was an eighth-minute gut punch that Leicester could not respond to as United kept just their second clean sheet in 16 league matches, ending a three-match winless run with a triumph that was close to being improved by a late Rashford free-kick that rattled the woodwork.

Solskjaer’s side coped well without their injured stars and Schmeichel was forced into an early save from Andreas Pereira’s curling free-kick.

United were soon breathing a sigh of relief, though, as James Maddison got through and held off Victor Lindelof to get an attempt that ricocheted behind off David De Gea’s foot.

It was a concerning wobble from United’s normally shaky backline, but the home side would soon have a platform to build on.

Pereira did well to beat Hamza Choudhury in a challenge and Rashford got to the ball just before Soyuncu, leading referee Martin Atkinson to point to the spot.

United have missed two costly penalties already this season but their No.10 kept his nerve to send Schmeichel the wrong way.

The hosts looked assured after the opener and Scott McTominay was impressing in midfield, with Aaron Wan-Bissaka, available after a back issue, looking bright down the right with Pereira.

Ben Chilwell, rattled by an earlier McTominay tackle, forced De Gea into a fine save as Leicester belatedly settled and the left-back hit a volleyed effort from the edge of the box that was tipped over the bar.

United held firm as the Foxes probed without seriously threatening before a half-time break that Solskjaer’s side returned from with renewed intent.

Daniel James fizzed just over as he went close to joining his manager as the only United players to have scored in their first three Premier League appearances at Old Trafford, before Juan Mata and Pereira had attempts.

Maguire elicited a huge cheer from the home fans after dispossessing Demarai Gray and bursting forwards and the Leicester old boy saw a header saved after Maddison whistled a free-kick just past the United goal.

Fred and Tahith Chong looked hungry after their introduction and James was irritated that he was unable to follow their hard work with a better shot.

Rashford struck the crossbar with a superb free-kick from nigh on 30 yards as United pushed for another, knowing that Leicester tend to finish games on top.

Rodgers’ side did indeed push for a late leveller and Wilfred Ndidi went close, firing a volleyed shot just wide of the near post with De Gea beaten.