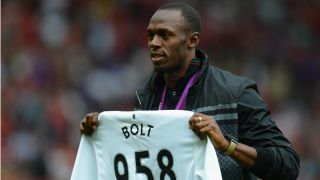 Usain Bolt, one of Manchester United's most famous fans, has offered his support to Alex Ferguson following the legendary manager's emergency surgery.

United released a statement on Saturday confirming that Ferguson had undergone an operation following a brain haemorrhage.

The club confirmed that the procedure had been a success, but there has since been no further update on the 76-year-old's status.

And Bolt joined other sporting personalities in wishing Ferguson well, posting an Instagram picture of him alongside the 13-time Premier League winner, along with the caption: "Prayers be Sir Alex".