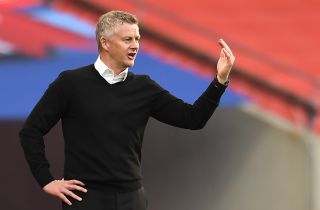 The 17-year-old is joining the red half of Manchester after scoring goals aplenty throughout the youth age groups for City.

United are set to pay an initial fee of just under £750,000 for McNeill, with the fee potentially rising to £1.35million if he triggers a variety of first-team clauses.

The teenager is understood to be attracted by the pathway to the Old Trafford first team and will initially link up with United’s Under-18s once the move has been ratified, having been between two category one academies.

United’s first team continue preparations for the new season on Saturday, when Ole Gunnar Solskjaer’s men travel to Aston Villa for a friendly.

Mason Greenwood, who was sent home by England on Monday for breaching their bio bubble, is understood to be doing individual training ahead of next Saturday’s opener against Crystal Palace and should be back with the group early next week.

But Paul Pogba is a doubt for the Eagles clash after missing France duty due to a positive Covid-19 test.

Solskjaer told club media: “Paul’s had a couple of training sessions so he’s lost out on a few sessions because of the virus, of course.

“But Paul is quick to get fit. Of course, he worked really hard to get back after lockdown last time and played the majority of the games.

“Hopefully, he’ll be ready for next weekend. I am not 100 per cent sure though.”

Axel Tuanzebe is set to miss the Palace opener but Luke Shaw should feature, with the left-back playing in United’s friendly at Villa on Saturday after recovering from an ankle injury that ruled him out of the end of 2019-20.

“For me, Luke is looking really good in training,” Solskjaer said. “He has come back, looking strong, and will play in the friendly against Villa.

“Then Axel is getting closer as well. In a few weeks’ time, I guess he will be with us training full-time and hopefully we’ll be able to give him games quickly.”