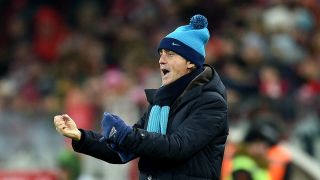 Roberto Mancini is to leave Zenit by mutual consent amid reports he is on the verge of being announced as the new Italy coach.

Mancini is thought to have become the Italian Football Federation's preferred candidate after being turned down by Carlo Ancelotti.

And his appointment as national team boss moved a step closer on Sunday, as Zenit confirmed the ex-Manchester City manager's contract would cease on Monday.

Italy have been searching for a new coach since Gian Piero Ventura was sacked in the wake of the country's failure to qualify for the World Cup.

Mancini took charge of Zenit in June but has only been able to guide them to fifth in the Russian Premier League with one game to go.

Zenit host bottom club SKA Khabarovsk in their final match of the season on Sunday.

Zenit and Roberto Mancini have reached an agreement to mutually part ways. Today's game will be his last match at ZenitMore details: May 13, 2018