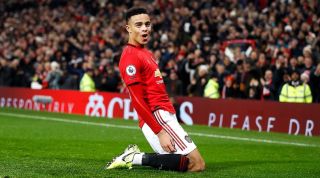 Mason Greenwood says the feeling when he scores for Manchester United is "out of this world".

The 18-year-old has enjoyed an excellent breakthrough season at Old Trafford, scoring 10 goals in all competitions for Ole Gunnar Solskjaer's side.

Greenwood first joined United in 2007 when he was just six years old, and he says it is "amazing" to now pull on the club's shirt at senior level.

“It's mind-blowing really,“ the striker told United's official website. “Being in the Manchester United first-team dressing room and stepping out at Old Trafford.

“I can't explain it really. It's just amazing. You see me smile when I score. It's out of this world.

“I want to make my mark at the club and score as many goals as I possibly can. I want to win trophies at United, every young boy coming up from the Academy does, so it would be amazing to get one of them soon.

“Everything has been quick and I've had to take everything on board really and to listen to what the manager and the other players have to say.

“It's been a hard journey and I'm nowhere near where I want to be yet. I'll carry on working hard and keep going.

“But if someone said to me at the start of the season, 'you'll score 10 goals for Manchester United in your first season', I would have taken it straight away. I've done that now and I want more.

“Ole is a major part. He has done it himself and knows what is he is talking about. Everyone listens to him. He helps me a lot.

"Obviously, Kieran [McKenna, United's first-team coach] as well. I was with him in my first season in the youth team and now he's with the first team.”

United will move to within three points of fourth-placed Chelsea with victory at Stamford Bridge on Monday.