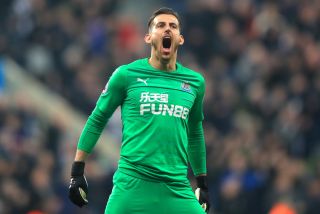 Martin Dubravka has signed a new six-year contract with Newcastle, the Premier League club have announced.

The 30-year-old goalkeeper, who first joined the club on loan from Sparta Prague in January 2017, has made 59 appearances for the Magpies.

The Slovakia international has been an ever-present for Steve Bruce’s side in the Premier League this season, keeping three clean sheets in his nine games.

He told the club’s website: “It is an amazing feeling.

“I have to say that it feels like time has flown. It’s been almost two years and I’ve found great people here who I can call friends.

“I’ve enjoyed my time here and I’m very glad that I can stay here for another six years.”

“He’s been absolutely fantastic since the day he arrived and he’s a hugely important figure for us both on the pitch and in the dressing room.

“He’s a massive part of our plans for the future, so it’s great that he’s agreed to stay with us for the next few years, and a fitting reward for his performances.”