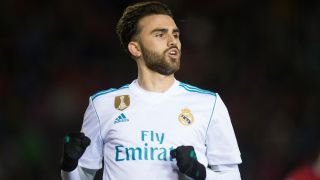 Real Madrid striker Borja Mayoral has joined Levante on loan for the rest of the season.

Fabio Coentrao has also left the Santiago Bernabeu, the full-back returning to Portugal to join Rio Ave after Madrid cancelled his contract.

"Real Madrid would like to express their thanks to the player for these years in which he has been part of the club and wish him all the best in this new chapter," they said in a statement.

Mayoral, 21, was expected to leave the European champions in pursuit of first-team football after Mariano Diaz was signed back from Lyon in a €33million deal.

Sevilla had been linked with the Spain youth international, who spent 2016-17 on loan at Wolfsburg, but he has instead sealed a move to Ciutat de Valencia.

Neither club have stated whether there is a purchase option included in the deal.

Mayoral made 14 appearances in LaLiga last season, just three of which were starts, and scored three goals.

Coentrao, meanwhile, has headed back to his homeland following a loan spell with Sporting CP last term.