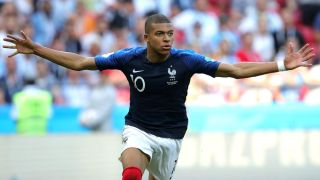 The Paris Saint-Germain star is the second France player in a row to win the prize, after team-mate Paul Pogba claimed four years ago.

The award, which can only be won by players born on or after January 1, is given to the outstanding young footballer at the finals.

"Technical qualities such as skill, style and charisma are taken into account, but so are other important factors such as a sense of fair play and a genuine impression that the player is playing for the love of the game," according to FIFA.

Mbappe scored four times in seven appearances to help his country lift a second world title, netting in the 4-2 win over Croatia in Sunday's final.

The 19-year-old became the first teenager to score twice in the same World Cup game since Pele in 1958 when he hit a double in the 4-3 last-16 win win over Argentina.