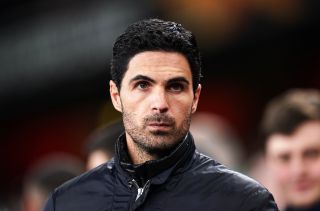 Owners Stan and Josh Kroenke hope the changes can help Arteta steer the Gunners into a new era of success, as the Spanish boss revamps the squad.

We are announcing today that head of football Raul Sanllehi is leaving the club and Vinai Venkatesham, our current managing director, will lead us going forward.— Arsenal (@Arsenal) August 15, 2020

“Raul has made a big contribution during his time with us and will always be part of the Arsenal family,” said the Kroenkes in a club statement.

“We thank him for all his hard work and expertise and wish him every future success.

“We have no doubt that Vinai is the right person to take the club forward. He has shown outstanding leadership during the current crisis and is held in high regard internally and externally.

“We know everyone will rally round him so we can move forward successfully.”

Sanllehi joined Arsenal from Barcelona in 2017, but the Gunners are understood to have wanted to streamline their off-field structure.

Unai Emery succeeded Wenger at the Arsenal helm in May 2018, but was sacked midway through his second term with the Gunners.

Ivan Gazidis left his role as chief executive in September 2018 and was not replaced, while head of recruitment Sven Mislintat’s 14-month stint came to an end in January 2019.

Former Arsenal midfielder Arteta guided the Gunners to the FA Cup crown this term with the 2-1 victory over Chelsea, and has since recruited Brazil forward Willian on a free transfer from the Blues.

Managing director Venkatesham thanked the owners and Arsenal’s board after taking a more central role at the club.

“I am thankful to Stan, Josh and the rest of the Arsenal board for their trust in me,” said Venkatesham.

“I will miss working closely with my colleague and friend Raul, but I am looking forward to this new challenge.

“There is much work to do to return Arsenal to the top of the game where we belong, which is what our fans rightly demand. While this will not happen overnight, I believe we have many of the critical ingredients to do so. There are many positives to build on across the club.

“While football faces uncertainties ahead as a result of the Covid-19 pandemic, I am confident Arsenal will emerge strongly and look forward with confidence.”

“I’m proud and pleased with the contribution I’ve made at Arsenal over the past three years, and look forward to enjoying the club’s future success. Arsenal is a true footballing institution,” said Sanllehi.

“I am proud to have been part of its history and I thank Stan and Josh Kroenke for this opportunity.

“Working with Vinai, we have built a top team for the future. Mikel has made an extremely positive impact since his arrival and has formed a strong team with our technical director, Edu.

“The academy is in very safe hands with Per (Mertesacker), and Huss Fahmy is a talented and highly-capable leader of our football operations.

“Personally, I now look forward to taking some time off and spending time with family and friends before setting to work on a new challenge and cheering Arsenal on to great things.”