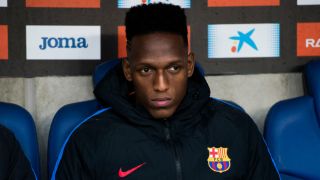 Yerry Mina admits he has received offers but would prefer to stay at Barcelona and win over head coach Ernesto Valverde.

The Colombia international confirmed this week he had been in touch with Everton about the prospect of a transfer to the Premier League.

The 23-year-old made just five LaLiga appearances last season and only two of those ended in Barca victories, while his performance in the shock 5-4 defeat to Levante drew plenty of criticism.

Mina is determined to prove his doubters wrong but says he will make a decision on his future after his post-World Cup break.

"I have offers but I want to succeed at Barca," he told reporters in Colombia.

"Right now, I'm enjoying my holidays and, when the time comes, I'll decide with my family what's best for everyone."

Mina joined Barca from Palmeiras for €11.8million in January, signing a five-and-a-half-year contract that includes a €100m release clause.

He scored three goals in three appearances at the World Cup for Colombia, who were knocked out on penalties by England at the last-16 stage.