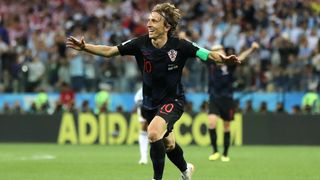 Croatia duo Ivan Perisic and Ante Rebic lauded Luka Modric, but said their focus was on the team heading into the World Cup quarter-finals.

Modric has been talked up as a potential Golden Ball winner in Russia, where he has scored twice to help his team into a last-eight clash with the hosts.

Perisic praised the Real Madrid midfielder, but said the team's performances were most important.

"He's our captain, he's our leader. We all stand behind him. Sure, he is one of the best players here so far, but we still have a few games to play.

"It doesn't really matter who gets individual awards, it's important that the team does as good as possible."

Rebic, who liked Perisic has netted once at the World Cup, echoed his team-mate's thoughts.

"Luka is our captain, our best player," he said.

"It's too early to talk about the best player of the tournament, because we are still only at the quarter-final stage, but that doesn't matter as much as the team performance."

Croatia face Russia in Sochi Saturday, with the winner meeting either England or Sweden in the semi-finals.