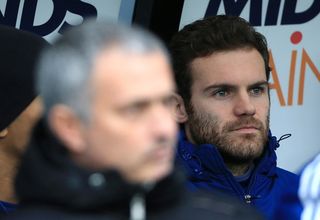 The Red Devils are expected to complete a £37 million deal for Chelsea’s two-time player of the season, subject to a medical, after the 25-year-old was unable to establish a place in the Portuguese tactician’s side.

Mourinho, however, sympathises with Mata, saying the good form of Eden Hazard and Oscar made it difficult to select him and that a transfer to United is a sign of their gratitude towards the Spanish international’s services.

“I think that Juan was fantastic,” said Mourinho. “He gave everything, but at this point the team is doing very well, with Eden Hazard and Oscar playing well.

"I think he was frustrated and disappointed. People in this club know him better than me, but I know enough that he deserves this.

"If he is not happy then, even if it is another big club in England, we will not stop him being happy if they make the right offer.

"One day, if he comes back to Chelsea in a Manchester United shirt then the stadium will show him how much they respect him and want him."

Despite former Valencia star Mata struggling to perform under Mourinho, the Chelsea supremo remains convinced that he will succeed at Old Trafford.

“We are convinced that he is going to do well. Manchester United pay a record fee because they know he is a player that can be important for them, it is not a gamble.

"We are convinced he is going to do well and we wish that. When we play him we will try and win and he will be the same, but everyone in this club wishes him well.”

Mata made 135 appearances for the club, scoring 33 times and assisting 58 goals.