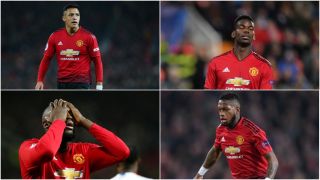 Jose Mourinho's ultimately ill-fated tenure as Manchester United manager will likely be remembered more for his grumblings about transfers and under-performing players than the silverware.

Mourinho was sacked on Tuesday, two days after a dire display in a 3-1 defeat to bitter rivals Liverpool, leaving the Reds 19 points ahead of United in the Premier League table.

A common theme of Mourinho's time at Old Trafford was his incessant demands for greater backing in the transfer market, despite spending a small fortune.

Sections of the media suggested United grew frustrated with Mourinho not getting the best out of players he identified, which meant alternative options were sought after.

Either way, few of the players brought in during Mourinho's time at Old Trafford have made a strong impression…

Seen as a coup after United reportedly pipped Manchester City to his signing, Fred has featured just eight times in the Premier League. When he has played, he has struggled to justify his rumoured £50million transfer fee. RATING: FLOP

Mourinho lauded himself for the signing of Dalot, claiming it was his familiarity with Porto – rather than any scouting expertise – which saw the right-back identified. He has shown flashes of quality in attack, but injuries have limited his appearances. RATING: N/A

An experienced third-choice goalkeeper, Grant was only ever signed to be a back-up to David de Gea and Sergio Romero. RATING: N/A

United showed they meant business when luring Lukaku to Old Trafford under the noses of Chelsea, paying a reported £90m. He scored 27 times in all competitions last term, but he has been poor this season. Considering the outlay and how much importance was placed on his signing, it is difficult to say the Belgium international has been a success. RATING: FLOP

Initially lauded as a masterstroke as Mourinho linked up with a key member of his last title success at Chelsea, Matic was one of United's best players in his first six months at Old Trafford. But his decision-making seemed to slow as the campaign progressed, and this season he has consistently been a weak link. Perhaps Chelsea knew what they were doing after all. RATING: FLOP

Brought in after catching the eye for Portuguese giants Benfica, Lindelof was said to be a player personally identified by Mourinho. However, he regularly looked out of his depth last term and while he has improved this season, he continues to look nervous and unconvincing. RATING: FLOP

The excitement around Sanchez's January arrival was immense, as City were left ruing the late intrusion of United. Nothing has gone to plan, however, with the Chilean scoring just three goals in 22 league games. On top of that, performances have been well short of expectation and the club are already said to be open to him leaving. Given he is reportedly earning close to £500,000 every week, he has to be regarded as one of the worst signings in Premier League history. RATING: FLOP

Having seen the mercurial talents of Pogba on display at Juventus after previously escaping United, the Red Devils brought him back four years later for a then-world record fee of £90m. Although his technical quality cannot be doubted, and he has been productive in terms of assists for United, it is difficult to class his time as a success, especially given his strained relationship with Mourinho. RATING: FLOP

Following a remarkable season with Borussia Dortmund, Mkhitaryan's signing was greeted with much excitement, as he looked set to inject some much-needed creativity. He proved to be the first of many to suffer Mourinho's tough love at United and made very little impact in the first few months. He did play an important role in their Europa League triumph, but contributed little else before being swapped for Sanchez, in arguably the least successful trade ever. RATING: FLOP

We would like to wish the best of luck for the future after completing his move to Arsenal.Thanks for the memories, Micki. 22 January 2018

The signing of Bailly from Villarreal caught most by surprise. While he had certainly shown himself to be a talent in LaLiga, it was argued he was still a bit raw. Fast-forward two and a half years and you could say little has changed. On his day, he is surely United's most talented centre-back, but he has more than a tendency to lose his head and Mourinho regularly left him out. RATING: FLOP

A free transfer from Paris Saint-Germain, Zlatan Ibrahimovic quickly silenced the doubters who said he was too old to compete in the Premier League. He scored 28 goals across all competitions, before a serious knee injury struck. Probably the only player signed in the Mourinho era to live up to expectations, let alone surpass them. RATING: SUCCESS