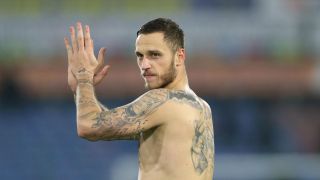 Arnautovic was involved in all four Hammers goals at the John Smith's Stadium on Saturday, the Austrian making it 2-1 just 11 seconds after half-time.

He then created two for Manuel Lanzini as Moyes' men ran riot to secure a win that lifts them up to 11th, five points clear of the bottom three.

For Moyes it brought up a significant milestone in his own career, but the Scot was keen to focus on the inspired form of Arnautovic.

"I'm really pleased with Marko Arnautovic," he said. "Everybody knew how good he was at Stoke City and maybe giving him a freer role up front has given him a chance to express himself."

When pushed on his own record, Moyes added: "To be in that position, alongside those great managers, is good and I'm just glad I have managed to win a few."

Quite an achievement for the boss January 13, 2018

The win boosts West Ham's survival hopes but Moyes is still keen to add new players to his squad to help them stay out of trouble.

"The board know - and they want to add a few players - it's just the difficulty of the month," Moyes continued. "We want to add players if that is possible.

"We have a long way to go but the players have done brilliantly well since we came in and they did very well today."

The German bemoaned a "below par" performance from his side and knows things have to improve quickly if they are to remain at a safe distance from the bottom three.

"It's not about the position in the table, it's about our performance today and we were below par," he said. "We had too many players that were below par, but we have to accept it because they're humans.

"We made too many easy mistakes which you can't do at this level. We have to do it better than we did today and we've done it in the past. We know what we've done wrong today."