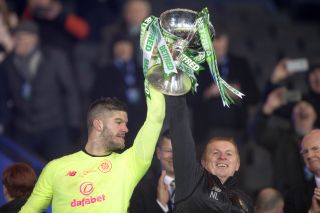 Neil Lennon admits he his moving his hunt for a new Celtic goalkeeper on to fresh targets after talks with Fraser Forster turned quiet.

The Celtic boss revealed a deal had been struck with Southampton which would have seen the giant Englishman return to Parkhead to help the Hoops in their quest for 10 titles in a row.

But there has so far been little indication from the 32-year-old former England stopper that he is keen on the move.

Now Lennon – who has been linked with Joe Hart and former Hoops keeper David Marshall – confirmed he is ready to look at other candidates.

He told Sky Sports News: “We are looking at other options. There was a deal (for Forster) agreed between the clubs but it’s gone quiet from the player’s side of things.

“We would dearly love him back here but if that’s not going to be the case then we’ll look elsewhere.

“We’re looking at a number of options on the goalkeeping front. It’s such an important position and Fraser did wonderful things for us last season.

“We’ve got big gloves to fill if you want to put it that way but ideally we’ll try to get an exceptional number one in again.”

As well as Forster, Celtic have also seen Craig Gordon, Jordan Simunovic, Eboue Kouassi and Jonny Hayes depart since the Scottish Premiership was prematurely curtailed due to the coronavirus crisis.

Forster’s Southampton team-mate Mohamed Elyounoussi has, however, signed on for another season-long loan spell.

But Lennon admits the current closed-door restrictions are frustrating his attempts to sniff out fresh recruits.

“We’ll probably get a fairer idea of the transfer market once the Premier League and other main leagues in Europe finish.

“But it’s been predominantly business as usual. We’ve got a lot of options for a lot of positions.

“The difficult thing is we can’t look at players live at the minute.

“A lot of (the scouting) is being done with analysis and stats, whereas ideally you’d like to see a player and what their strengths and weaknesses are.

“But that’s the only difference and there’s been a mountain of work done from the recruitment side of things.

“We’ve got Mo Elyounoussi back which is a big plus for us so there’s a continuity there and we’ll look to add one or two to the group.”