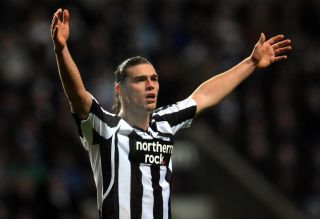 Steve Bruce is ready to unleash “old-fashioned centre-forward” Andy Carroll on the Premier League as he attempts to rekindle his career back at Newcastle.

The 30-year-old striker, who has not played since February because of an ankle injury which required surgery, has trained all week and is ready to make a second debut for the Magpies following his summer return to Tyneside.

Bruce knows the former West Ham, frontman will have to be carefully managed, but is hoping to see flashes of the form which won him a then British record £35million switch to Liverpool in January 2011 after a blistering start to his career at St James’ Park.

He said: “Well, we all know that if Andy stays fit, the he’s a wonderful, wonderful centre-forward, a bit old school, if you like to say that, but certainly of his type, I don’t think there’s been anybody better certainly in the last eight, 10 years when he’s been playing.

“Of that certain type of old-fashioned centre-forward, a fit Andy Carroll is going to be huge going forward, that’s for sure.”

Carroll’s return, along with that of winger Allan Saint-Maximin, who aggravated a hamstring problem at Tottenham last month, will give Bruce options in attack which he has lacked for much of the season to date with Dwight Gayle still battling a calf injury.

But it is not just on the pitch that the Gateshead-born frontman is having an impact.

Bruce said: “The couple of conversations I had with him when we were signing him, it was, ‘Can he be a help in the dressing room, can he help the young lads that we’ve got over the pitfalls that surround it and what’s it like to play at this club and the demands of this club?’.

“It’s only a small, little city and you’re certainly under the scrutiny of the eyes of everybody so in that respect, he’s been terrific.

“We’ve seen an up-turn in training just because he’s out there too, you can just sense it a little bit, so he’s given everybody a lift at the right time.”

Newcastle go into the game having slipped back into the Premier League’s bottom three after last weekend’s 3-1 defeat at Liverpool, but Bruce has brushed aside talk of an early-season “cup final”.

He said: “We’re at home, it’s a wonderful opportunity and let’s hope we can get our first home win.”