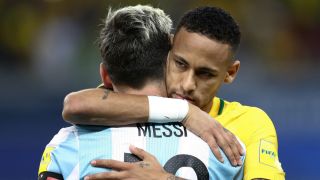 Neymar says he is the best player in the world, but only because Cristiano Ronaldo and former Barcelona team-mate Lionel Messi are from another planet.

Ronaldo and Messi have won five Ballons d'Or each, dominating football's grandest individual award for the past decade.

Neymar, football's most expensive player after leaving Barcelona for Paris Saint-Germain in a €222million deal last August, is widely considered a future winner.

And the Brazil international, who starts his World Cup campaign against Switzerland on Sunday, accepts he is still ranked below Messi and Ronaldo.

"The two who are above all others today are Cristiano Ronaldo and Messi," Neymar said to Brazilian YouTube channel Desimpedidos.

"For all modesty, today I am the best player in the world - because they are from another planet."

Neymar has twice finished third in the Ballon d'Or voting behind Ronaldo and Messi but could compete for the 2018 prize should he shine in Russia with Brazil.