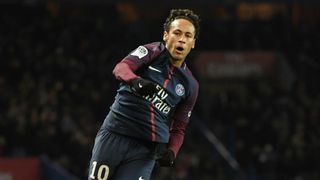 The Brazilian scored four goals and provided a further two assists as Unai Emery's league leaders moved 11 points clear at the top of the table.

No player has been involved in six goals in a single Ligue 1 game since Opta started to collect the data for the French top-flight in the 2006-07 season.

Neymar had already wrapped up his first PSG hat-trick with a superb solo effort, before Cavani drew a foul in the area in the last 10 minutes.

With Cavani having earlier drawn level with Zlatan Ibrahimovic on 156 as the most prolific goalscorer in PSG history, the Parc des Princes crowd chanted for the Uruguayan to take the spot-kick.

But Neymar, who has previously rowed with Cavani on the pitch regarding set-pieces this season, stubbornly insisted on taking the penalty himself to score his fourth of the night to cap a memorable performance.