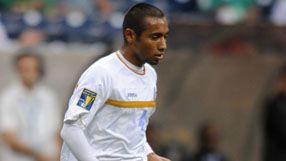 Collado, 26, had been banned by the Nicaragua Football Federation (Fenifut) "in relation to the friendly match... between Nicaragua and Guatemala on 4 September 2010", FIFA said in a statement. Guatemala won the game in Florida 5-0.

Fenifut originally banned Collado in January last year. It said only that he had been banned for "acts against sport and honour of the country" but did not specifically mention match-fixing.

Collado, born in El Salvador, complained to Nicaraguan media that he had been given no explanation as to the reasons for his ban. However, further details emerged over the course of the next 18 months in media reports.

In July last year, Salvadoran newspaper El Grafico named Collado as one of four members of a Singapore-based gang who tried to bribe players to manipulate matches in the CONCACAF Champions League.

These included a match between Real Salt Lake City and Arabe Unido in August 2010, when approaches were allegedly made to the players of the Panamanian side. Salt Lake won the game 2-1.

The accusation was repeated this July during a programme broadcast by ESPN's Latin American service, which also said Collado had tried to offer money to players of Salvadoran club FAS to manipulate matches in the same competition.

Central America is seen as especially vulnerable to match-fixing as many clubs struggle financially, playing conditions are poor, salaries low and players sometimes do not get paid on time.

The case was denounced by other players to coach Ever Almeida, who took it to the Guatemalan federation.

Collado played for Nicaragua between 2008 and 2010. His club career was spent with America and Real Esteli in Nicaragua and Once Municipal, Nejapa and Alianza in El Salvador.