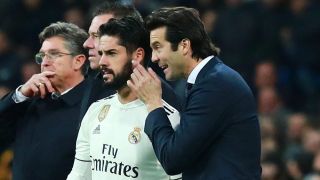 Real Madrid coach Santiago Solari insists he sees no one as an "indisputable" starter after receiving criticism for his sparing use of midfield star Isco.

The Spain international is yet to start a match for Madrid since Solari replaced the sacked Julen Lopetegui following the 5-1 Clasico embarrassment against Barcelona at the end of October.

Isco has been used from the bench by Solari, but fans and pundits alike have been puzzled by his treatment of the playmaker.

Solari has been asked about Isco continuously in news conferences, with the Argentinian adamant he is satisfied with the former Malaga man.

But ahead of Thursday's Copa del Rey clash with Melilla, Solari again warned Isco and other Madrid players that no one will be certain of a place in his starting XI.

"There are 24 players on the squad, plus the boys from the academy," Solari told reporters. "I am watching them work with enthusiasm.

"This Thursday there is a match and many players will come, we want to see several [younger] players on the field.

"I think I already told you the other day. I do not believe in anyone being indisputable, neither now nor when I played.

"Your job is to discuss those who play and those who do not play, and also the coaches. Everything is debatable, what we have to do is give our best to be available and give our best when playing.

"Then there are injuries or fitness issues. The work of the coaches is to interpret well and try not to make mistakes."

However, Isco's position has not been helped by the posting of a photo on social media in which some have said he looked out of shape.

Solari insists he pays no attention to such things, though.

"I manage no social networks and so I did not see Isco's picture," he said. "If you put the focus on the one that did not play, you will always have someone to ask me about."

Thursday's game will be the first since Luka Modric won the 2018 Ballon d'Or, making him the first player to beat Cristiano Ronaldo and Lionel Messi to it since Kaka in 2007.

Many have questioned the result given Modric's underwhelming start to the 2018-19 campaign, but Solari has no doubt the Croatian deserves his prize.

"It was Luka's year, and the focus should be on him," the coach said. "He deserved this prize after a marvellous year with Madrid and the Croatian nation team.

"It comes in a period of maturity in his career, which makes it even nicer because he appreciates it's true value. So, we are very happy for him."