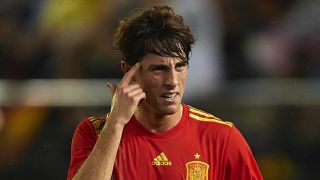 New Real Madrid signing Alvaro Odriozola has resolved to repay the faith Julen Lopetegui showed when he made him a surprise member of Spain's World Cup squad.

Right-back Odriozola, 22, was presented to Madrid fans on Wednesday after completing a reported €40million move from Real Sociedad, for whom he made 35 LaLiga appearances last season.

His arrival at the Santiago Bernabeu sees him link-up with former Spain coach Lopetegui, who selected the defender ahead of Sergi Roberto and Hector Bellerin for his 23-man squad for Russia.

Lopetegui was ultimately removed on the eve of the tournament for failing to inform the Royal Spanish Football Federation of his agreement with Madrid, a saga that has not affected his reputation in Odriozola's eyes.

"I'm eternally grateful to him for giving me the opportunity to play at a World Cup and I'm very happy that he's my coach," Odriozola said.

"I've been with him this morning and he's conveyed to me that I am going to have all the confidence in the world, that I have to give my best and that it's a big club with extremely high demands, which is why half measures are not worth it.

"He's a specialist in transmitting his message to the group."

Lopetegui's appointment at Madrid heralds a new chapter for the European champions, after Zinedine Zidane's decision to step down at the end of last season.

The most significant change since Zidane's exit has been the sale of Cristiano Ronaldo to Juventus, which Odriozola views as an opportunity for the team to start afresh.

"He's a Real Madrid legend. We have a lot of respect for him," he said of the Portugal superstar.

"But we must look to the future; a new era begins. In the changing room we've got the best in the world and it'll be a very nice experience."