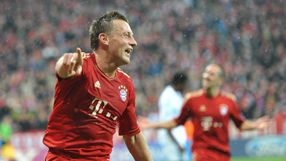 Four-time European champions Bayern look set to meet nine-time winners Real Madrid in a mouth-watering semi-final later this month, with the Spanish club hosting APOEL Nicosia on Wednesday and holding a 3-0 advantage from the first leg in Cyprus.

Olic, a surprise addition in the line-up ahead of Bundesliga top scorer Mario Gomez, has spent most of the season on the bench while the Germany international has been scoring at will, 23 times in the league and 11 times in the Champions League.

The 32-year-old Croat has repeatedly said he would be moving on at the end of the season if he did not get more playing time but coach Jupp Heynckes had no reason to change as long as Gomez kept scoring.

Heynckes, however, surprisingly opted to bring in Olic for their second leg against Marseille after their 2-0 win in France last week.

The striker repaid the trust with a brace reminiscent of the crucial goals he scored for Bayern in the quarter-finals and last four en route to the 2010 Champions League final.

"I am very happy for Ivica, not only because he played well but also because he scored," Heynckes told reporters.

"He worked very hard. He is a bonus for us now. We know we play every three days and I need alternatives, players who can decide a game," said Heynckes, whose team are chasing a treble of domestic titles and the top European prize.

"To have the feeling that 'I am valuable for the team' is very important for a player," said the former Real Madrid coach.

Olic told reporters: "It is a good feeling. I am a player with a lot of experience but I was stressed before the start.

"To play in the Champions League is always something special. I am very happy to have scored and to see the team is through to the semis."

Olic gave the hosts a flying start when he connected with a Franck Ribery pass in the 13th minute and tapped in his second after a well-timed pass from David Alaba in the 37th.

"I am really happy for Ivica. He came off the bench and straight away scored two goals. That is really important for us," said Ribery.

Bayern, booking their spot in the last four for the second time in three seasons, are desperate for a final appearance that will be hosted by Munich on May 19.

Marseille, who needed to score at least three goals, had two shots on target in the opening minutes but Bayern got the early goal they wanted, dashing any French hopes when former Marseille player Ribery cut back into the box for Olic to slot in.

The French reacted instantly but Bayern goalkeeper Manuel Neuer did well to palm a powerful Stephane Mbia shot over the bar.

The Germans gradually got more and more possession, threatening with a thundering Anatoliy Tymoshchuk drive in the 27th before Marseille goalkeeper Steve Mandanda denied Olic from close range seconds later.

Olic made amends in the 37th, timing his run to connect with Alaba's low cross.

It was the end of an unexpected run for the 1993 European champions Marseille who ironically won that title in Munich and who have now lost nine of their last 10 games in all competitions.

"If we had converted those early chances it could have been different," said Marseille coach Didier Deschamps, whose team are in ninth place in Ligue 1.

"We tried to get the best out of this situation. But Bayern are deservedly in the last four. The adventure was beautiful."

"Yet it was not always logical what we did on the pitch to get to the quarter-finals," he said in reference to a string of last-gasp goals