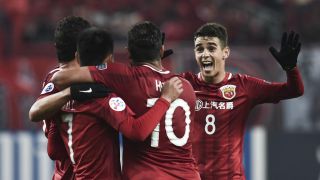 Shanghai SIPG's stars came to the fore as Oscar and Hulk netted in a 5-1 win over Western Sydney Wanderers on a high-scoring day of AFC Champions League action on Tuesday.

AND THE OSCAR GOES TO...

Following on from the Academy Awards, it was fitting that Oscar gave a sparkling display in SIPG's demolition of the 2014 champions.

The Brazil international scored the second goal of the game, set up by Hulk after a sweeping move through midfield.

Hulk was also in excellent form, scoring the opener with a thumping header before his free-kick was too hot for Jerrad Tyson to handle and Shi Ke bundled home, with Elkeson and Wu Lei completing the rout either side of half-time.

SIPG were bumped into second place in the group courtesy of Urawa's hammering of Seoul, five separate scorers doing the damage against South Korea's champions. SIPG and Urawa will meet on the next matchday, tied at the top of Group F after winning both of their respective opening games.

The biggest win was secured by Ulsan, who bounced back from an opening defeat at the hands of Kashima Antlers by hammering Roar 6-0.

Kim In-sung and Mislav Orisic helped themselves to braces as the Roar defence was parted time and time again.

The heavy scoreline was arguably not the most eye-catching result in Group E as Muangthong recorded their first victory in the Champions League proper, beating Kashima 2-1 thanks to former Deportivo la Coruna and Newcastle United striker Xisco's 95th-minute effort.

Incredibly, all four in the games across Group C and Group D featured last-gasp winners.

Omar Abdulrahman's spot-kick a minute from time downed Bunyodkor 3-2, while 10-man Al Ahli had Omar Al Somah to thank in their 2-1 win over Zob Ahan, his 86th-minute strike helping them to stay top of Group C.

In Group D, Mohammad Al Shalhoub was the hero for Al Hilal, converting a penalty in the sixth minute of stoppage time to see off Al Rayyan 2-1, while Mehdi Taremi scored twice in the final 10 minutes to guide Persepolis to a 3-2 win against Al Wahda.