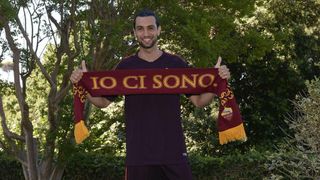 Javier Pastore underwent a medical at Roma on Tuesday ahead of an impending switch from Paris Saint-Germain.

Playmaker Pastore touched down in the Italian capital on Monday as a transfer that will reportedly be worth an initial €20million edges closer to completion.

The 29-year-old was a bit-part figure at PSG in 2017-18 and his lack of action at club level resulted in him being left out of the Argentina squad for the World Cup.

His arrival at Stadio Olimpico comes as Radja Nainggolan nears a move to Inter, with Nerazzurri sporting director Piero Ausilio announcing on Monday "conditions have been met" to sign the Belgian midfielder.

Pastore won five Ligue 1 titles during a successful seven-year stint at PSG but is now set to return to Italy, where he plied his trade for Palermo from 2009 until 2011.

Roma last week announced the signing of Justin Kluivert from Ajax, while Davide Santon and Nicolo Zaniolo are expected to join as part of the deal that sends Nainggolan to San Siro.