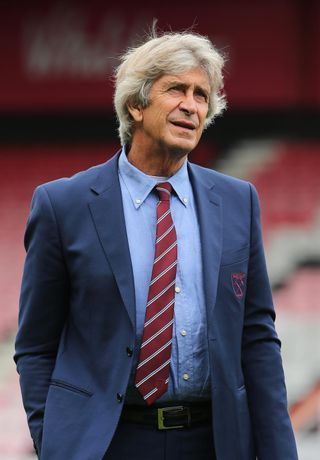 Manuel Pellegrini felt hard done by after VAR awarded a goal against West Ham for the second week running.

Jordan Ayew was flagged offside as he prodded Martin Kelly’s knock-down into the net three minutes from time.

But after a lengthy VAR review, offside checks on Kelly and Ayew both went Palace’s way by millimetres to condemn West Ham to a dramatic 2-1 defeat.

It came a week after Joshua King was initially flagged offside, only for the decision to be reversed, as the Hammers were held 2-2 at Bournemouth.

Pellegrini’s frustration was compounded by a penalty awarded for handball against Declan Rice which let Palace back into the match.

Sebastien Haller had given the Hammers the lead early in the second half, but England midfielder Rice looked like he was hailing a taxi when the ball struck him in the area, and Patrick Van Aanholt took full advantage from the spot.

“We created enough chances in the first 45 minutes to be at least one goal in front, we scored in the second half and then came the penalty which the referee decided was intentional handball,” said Hammers boss Pellegrini.

“I don’t want to talk about the refereeing decisions, he’s the referee, we have to accept it. But it’s an instant reaction. I didn’t think Rice wanted to block the ball.

“We are a little bit unlucky with the VAR, in the last game and this one.”

While the Hammers missed the chance to climb back to third, Palace moved up to fourth and are now top dogs in London, for 24 hours at least.

Manager Roy Hodgson hoped the VAR controversy would not detract from his side’s performance, with the Eagles securing a first win at the London Stadium in four visits.

“It’s great when it works in your favour,” said Hodgson. “But the major disappointment is that is what will be written about, rather than the quality of our performance.

“VAR is what it is. I can understand a manager suffering a decision which was close, and on this occasion we came out on the right side of it.

“But I thought our performance meant we don’t need to apologise for anyone for winning here.

“To come here and win at a ground we don’t win at very often, breaking that hoodoo, it’s a victory the players not only deserved but worked very hard for.

“It’s nice to start reasonably well, but you know you’ve got to keep up that pace and one of the things we don’t have is a big squad.

“But if we can keep our heads above water and get to January I hope we can do something about that.”