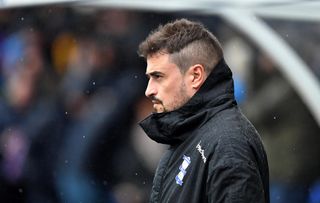 Birmingham boss Pep Clotet insisted his side should have been awarded a penalty in the final minutes of their 2-2 draw at QPR.

Scott Hogan scored twice for the Blues and his 80th-minute equaliser extended their unbeaten run to 13 matches.

But Clotet felt there should have been a spot-kick and a chance for Hogan to complete his hat-trick following a stoppage-time challenge on the striker by Yoann Barbet.

Clotet suggested a penalty might have been given had Hogan not initially stayed on his feet before stumbling.

“He could have had another goal because possibly that was a penalty at the end,” said Clotet.

“Again, we don’t get it awarded. Unfortunately we’re used to that and eventually this has to change.

“The penalty was very clear and it would have meant another chance for him.

“What are we doing? Are we encouraging people to dive in the box? It’s a penalty and I think everyone saw it.”

Hogan opened the scoring in the 24th minute and hauled the Blues level after two QPR goals in the space of four second-half minutes – Marc Pugh equalised for the hosts and Jordan Hugill put them ahead.

The double took Hogan’s goal tally to six in seven games since his arrival from Aston Villa.

He has struggled for fitness and form since a big-money switch to Villa from Brentford but has been a revelation since his loan move.

Clotet said: “I think he feels very good here. We said at the beginning that we wanted the Scott from Brentford – and slowly we’re having him.

“For how we play, he is exactly what we want. His movement is very sharp and he’s a big threat in the final third.

“I always was very clear that he was a player for us. I always focused on what he did at Brentford and I was very happy when the club managed to bring him in.”

They failed to deal with Dan Crowley’s right-wing corner and Hogan pounced to score from close range after Gary Gardner had beaten Geoff Cameron in the air.

“We didn’t attack the ball well enough and we were sloppy and paid the price,” Warburton admitted.

“We dropped two points. We were 2-1 up, controlling the game and had big chances.

“We went 1-0 down and needed to change the tempo. We did that and got two quick goals but I think we should have had three or four and we didn’t take the chances.

“When you get in a position like that, when you’re 2-1 up with 10 minutes to go, you’ve got to try and capitalise on it.

“We should have been 3-1 up and out of sight. That third goal would have changed the whole dynamic of the game.

“When it’s 2-1, any team is vulnerable when a side is committing bodies forward. But we should have defended our goal better.”