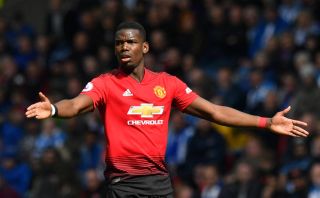 Paul Pogba believes the best way to combat racial abuse during games is to play well and smile.

The Manchester United and France midfielder has revealed he was abused by a supporter during his time playing in Italy with Juventus.

Racism has been high on the agenda in recent months with incidents involving the England national team, Raheem Sterling and Pierre-Emerick Aubameyang among a number of high-profile instances.

There have been suggestions players should walk off the field in such circumstances but Pogba does not believe that is the best solution.

Speaking to LifeTimes, a new podcast series produced by The Times, the 26-year-old said: “It is really sad to see that on the football pitch.

“To do something like that is really low in 2019. You try to speak about it but it just carries on.

“If they’re racist or ignorant, I don’t know, or they just don’t want you to perform well. I hear a lot of things but I don’t react, I smile.

“You won’t leave the pitch if you want to play. You play and try to score for your team, try to win and that’s it. And life goes on and at the end, they will come after the game and they will ask for your picture.”

Reflecting on his own experience with a fan in a game against Fiorentina, Pogba said: “He made some sound like, maybe, a monkey. I said, ‘Why?’ I just gave him my shirt and they were really happy, and then at the end they just applauded.

“I’m sad, not angry because I am happy with myself. I enjoy playing football, I enjoy giving smiles to people and that’s it.

“That’s all I need in life – be happy in yourself, be loved by people and don’t think about people who hate, or people who are racist or ignorant, because they just want to pull you back.”

In an in-depth interview, Pogba also admitted it took him time to readjust to expectations of him following his then world-record £89million move back to United in 2016. Pogba had been an inexperienced youngster when he left United for Juve four years previously.

He said: “Because it was the biggest transfer in history at the time, you get judged differently. We expect more from you, I guess. You expect more because of the price tag.

Pogba’s on-field body language has been criticised during his time at United but he insists an apparent languid look is simply his style.

“Body language, haircut – all these things are just to speak because since I was a kid, I always play like this and it’s not a problem.

“When I win, when I score, make an assist, have good games, it is not a problem.”