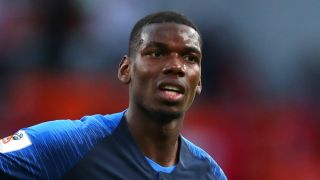 Paul Pogba says fellow France midfielders N'Golo Kante and Blaise Matuidi must have "15 lungs" because of the ground they have covered at the World Cup.

Kante and Matuidi impressed as France beat Peru 1-0 to secure progression from Group C on Thursday, while Pogba was involved in Kylian Mbappe's winning goal.

Chelsea midfielder Kante has already recorded 27 recoveries at Russia 2018, according to Opta data, which is one short of France's best tally of 28, managed by Pogba at the 2014 finals in Brazil.

And Pogba, also involved in both his team's goals in a 2-1 opening victory over Australia, was full of praise for his hard-working team-mates.

"My duo with Kante? It's so easy to play with 'NG'," Pogba told reporters.

"He is everywhere. He must have 15 lungs.

"Blaise has 15 lungs too. I'm surrounded with talent."

Although France have been far from impressive at the tournament to date, Pogba noted they have at least got the job done.

"We've won our two matches so far," he added. "You have seen that there are some very big teams here that have not managed that."