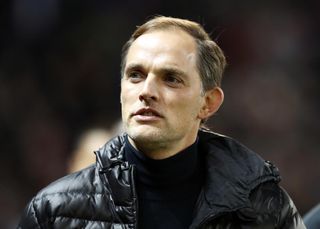 Thomas Tuchel has warned Paris St Germain to expect a tough test against Monaco as they return to Ligue 1 duty on Sunday.

The runaway domestic leaders drew 2-2 with Real Madrid in the Champions League on Tuesday after coming from two down in a wild final 10 minutes, and return to league action to be greeted by the 2017 champions.

Monaco are nowhere near that vintage, lying 13th, while PSG have won two titles since and lead by five points even after second-placed Marseille’s win on Friday night.

But Tuchel told psg.fr: “(Monaco) are very strong, especially in attack. They create a lot of chances and have a lot of quality up front and in midfield.

“We will have to be attentive and defend well to be able to create chances. We need to play in their half and not lose the ball stupidly.”

There is unlikely to be any repeat of Tuchel’s caution-to-the-wind formation from midweek, when he threw four men up front to inspire his side’s dramatic late comeback in Madrid.

“It makes things more difficult for the two midfielders,” he admitted.

“I don’t think it is a stable enough system. You need three midfielders to stabilise it and stay solid defensively.

“I chose the system with four in the second period in Madrid because we needed a bit of a crazy match to come back. We did not have enough freedom in attack and we had to change something and take more risks.

“We were happy with the draw but we lacked equilibrium, certainly too much at this level.”

PSG will be without Marco Verratti while fellow midfielder Ander Herrera is a doubt for the game. Monaco have forward Islam Slimani suspended.

Coach Leonardo Jardim told Monaco’s official website: “Football is a sport of passion, nothing is won or lost in advance.

“Paris reinforce every year. They remain the best team in France and one of the biggest in Europe.

“Our project is completely different, Paris is another reality.”