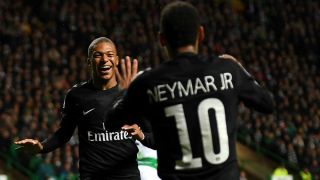 PSG stunned the footballing world in activating the buy-out clause in Neymar's contract to more than double the world record for a transfer fee.

The Parisians are also set to shell out for Kylian Mbappe when a loan move from Monaco becomes permanent next season, with eyebrows raised over PSG's cooperation with Financial Fair Play regulations, while UEFA have also confirmed they are looking into the deals.

Elber, who also played for Ligue 1 side Lyon in his career, believes that clubs in the Bundesliga now cannot keep up with the likes of PSG, who he accuses of distorting the market.

"There is no [Bundesliga] club that would say 'Yes, we pay 100 or 200 million euros'. I don't think any player is worth such a large amount," Elber told DAZN.

"Neymar is a superb player but I think PSG has destroyed the whole market right now by paying these amounts.

"Not only for Neymar but also Mbappe. 200 million euros if they buy him that is unhealthy for football."

The Bundesliga was not without its own transfer controversy in recent months, with Ousmane Dembele leaving Borussia Dortmund to join Barcelona in a club-record deal worth more than €100m.

France attacker Dembele went on strike at Dortmund to force through the move, a dangerous precedent in the eyes of Elber.

"If a player wants to leave his club, a contract has no worth anymore," the former Brazil striker said.

"He just rips the contract up and leaves.

"Dembele has shown that at Dortmund. No training, I want to leave. That's not good. Towards the fans that's not okay, too.

"Players lose the love they normally should show on the pitch. For me, football has never been a job. I had fun playing and it was even better to earn money doing that.

"Today that has changed. Of course, players are having fun too and they want to win titles and matches but it's different and that's a pity."