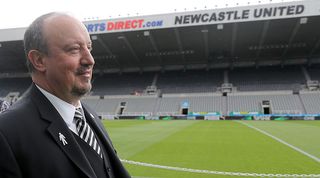 Rafael Benitez will be considering his options after it was announced that he will be leaving his post as Newcastle manager when his contract expires on June 30.

Like a tired and faithful dog that keeps getting kicked by its abusive owner, Magpies fans are also contemplating what's next for them (READ! Help me – I don’t know how to love Newcastle United any more).

There are several options for their beloved soon-to-be-former gaffer in the meantime – but what's next for the bloke they cheerily labelled Rafa the Gafa?

With contract negotiations at Newcastle appearing fraught in recent weeks, Benitez has been heavily linked with a big-money move to China. Reports claim that the 59-year-old has been offered £12 million per year to take over at Dalian Yifang, which would make him the highest-paid manager in China. There has been little indication as yet, however, that Benitez is tempted.

Benitez’s Newcastle exit comes five days after it was announced that Luis Enrique was standing down as manager of the Spain national team for personal reasons. Enrique’s assistant, Robert Moreno, has taken over and is due to lead them through to Euro 2020, but Spain have now had four managers in the past year and appointing another one, if results are bad, is hardly inconceivable.

It seems unlikely, but a return to Chelsea is a possibility. The London club are looking for a new manager after Maurizio Sarri’s move to Juventus, after all. Frank Lampard has been heavily tipped for the job, but there has been no significant development on that front in the week since Sarri’s departure.

Benitez boasts the same credentials that attracted Chelsea to him when he had a stint as interim boss at Stamford Bridge in 2012/13 – a spell which yielded Europa League success. The downside was that he never truly won over the fans due to his past Liverpool connections, and that would count against him again.

Bear with us. Not yet, obviously – the Reds only gave Ole Gunnar Solskjaer the top job in late March, and the Norwegian was handed a three-year contract to rebuild at Old Trafford and finally get close to tickling the Premier League trophy in the club's post-Fergie future.

But it's a huge, daunting job to take on; a colossal rebuilding job that may well end in tears. What happens if Manchester United start the season badly and show signs of slipping out of the top six? It's already bad enough them being out of the top four and Champions League, but slipping further would be unthinkable. If he's available, Benitez offers a safe pair of hands – and proven success. United could do much, much worse.

It's thought that Benitez would prefer to stay in England: his family are settled in the country and are still based on Merseyside following his successful time at Liverpool from 2004 to 2010. But, Chelsea aside, there are no big jobs currently available. He would have to bide his time and wait for an opportunity.

His move to Newcastle shows it needn't be a top-six club, but the Spaniard would look for somewhere with notable stature. He would surely also consider openings in La Liga or Serie A should they arise.

Stranger things have happened. If the Magpies struggle to find a new boss, or their much talked about, on-off takeover ever happens, maybe an olive branch could be offered. It would certainly be popular with supporters...