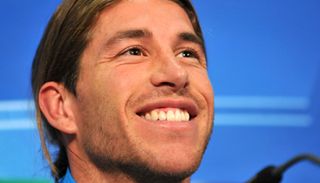 Better known for his tough tackles, powerful heading ability and nerves of steel when taking penalties, the 27-year-old Spain international appeared in the conference room to represent the club and deftly handled a string of awkward questions.

"If I am here it is for a reason. I can also answer questions just like the boss," Ramos said.

"We are here to talk about football, and not about controversy or the future of anyone.

"Today we decided it would be the players who would come out and I was delighted to be able to do it. I am not here to talk about Mourinho but to talk about the final."

Over the last week, Mourinho has kept a low profile though it is not clear whether it was by choice or through club orders.

Since Real's defeat to Borussia Dortmund in the Champions League semi-finals two weeks ago, a third successive exit in the last four of the competition, speculation has been rife that Mourinho's time at the Bernabeu is coming to an end.

He has done little to dampen the rumours of a possible return to former club Chelsea.

The 50-year-old's blunt belittling of goalkeeper Iker Casillas and defender Pepe and his disregard of a call for club unity from president Florentino Perez have stoked the rumours of an imminent departure.

The cup final against city rivals Atletico Madrid at the Bernabeu on Friday, is the side's last chance to win a major trophy this season after Barcelona wrapped up a fourth La Liga title in five years last weekend.

Ramos, who at one point pretended to have an earpiece from which he was receiving instructions from Mourinho, dodged one or two trickier questions with a big grin and polite refusal to answer.

"Being realistic, if we lose tomorrow the season will be a failure in terms of titles, but not on a personal level," Ramos added.

"It is not about trying to save a season with a title, it is about finishing the season well. You can lose, but there are ways of losing.

"The important thing is the group, over and above individuals."