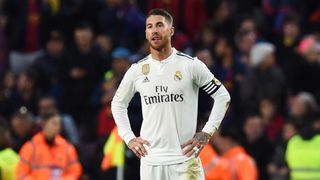 Sergio Ramos says Real Madrid's players will have no say in whether Julen Lopetegui will be sacked but reiterated the team are with the under-pressure coach "to the death" after their Clasico humiliation.

Despite Barcelona being without injured captain Lionel Messi at Camp Nou on Sunday, Ernesto Valverde's men ran out 5-1 winners with Luis Suarez scoring a brilliant hat-trick.

Lopetegui's men trailed 2-0 at the break and a tactical change saw an improvement from Madrid before a trio of late goals consigned Los Blancos to a damaging defeat.

Madrid have now lost five of their last seven matches in all competitions, languishing ninth in the LaLiga table, seven points behind defending champions Barca.

Captain Ramos and his team-mates have consistently backed Lopetegui but reports have suggested the former Spain coach could be sacked as soon as Monday.

And Ramos accepts the decision is out of the squad's hands with former Juventus, Italy and Chelsea coach Antonio Conte reportedly lined up to succeed Lopetegui.

"I am not going to change what I say," Ramos said. "The coaches and the players are with the [head] coach to the death. Results determine a lot whether a coach stays.

"But it is not our decision, it comes from above. We have heard nothing. So we will stay the side, and let the hours pass, and what must happen will happen."

Ramos was asked by reporters whether Madrid require a stronger head coach, in a clear allusion to Conte's links with the club but the centre-back would not comment directly on speculation surrounding the Italian.

"I've always had a good relationship with my coaches," Ramos said. "You win respect, you don't impose it.

"We have won a lot with coaches - you know who they are. Sometimes managing the dressing room is more important than the coach's technical knowledge."