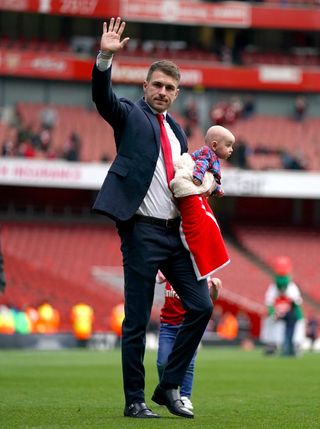 Aaron Ramsey bade an emotional farewell to Arsenal on a day when the club also said goodbye to any realistic hopes of finishing in the Premier League’s top four.

After seeing rivals Tottenham and Manchester United once again fail to win, the Gunners could not take advantage as they were held to a 1-1 draw by Brighton in their final home game of the campaign.

Pierre-Emerick Aubameyang’s contentious eighth-minute penalty was cancelled out by Glenn Murray’s second-half spot-kick to earn Brighton a deserved point at the Emirates Stadium.

The result leaves Arsenal three points behind neighbours Spurs in fourth place, with their goal difference inferior by eight and only one game remaining.

After the disappointing display, Ramsey was one of three departing players given a guard of honour as he prepares to move to Juventus when his contract expires this summer.

While Ramsey will be playing Champions League football in Turin next season, it remains to be seen if Arsenal will join Juventus in Europe’s elite club competition.

His side head to Valencia on Thursday for the second leg of a semi-final they are in charge of after beating the LaLiga outfit 3-1 in last week’s home leg.

“We had the idea to continue taking chances for the opportunity against Burnley next week, but today we drew,” he said.

“We know they are very organised and strong defensively so the key was scoring the second goal. We tried to do that and they gave us some minutes to come back, and again we tried for the second goal and made chances, but their defence did very well and their goalkeeper made some big saves.

“I think we can speak now about the different situations and issues in the season, but it’s better to take the focus for Thursday against Valencia – and we are going to do the analysis also.

“The Premier League is our first target and we didn’t take this position like we wanted.”

Ramsey was joined by the retiring Petr Cech – and, in a surprise move, England forward Danny Welbeck – in being afforded a guard of honour and presented with a memento by Arsenal chairman Sir Chips Keswick.

He then broke down in tears as those fans who had remained serenaded the Wales international – who played for the Gunners for 11 years and scored two FA Cup final winners for the club.

“Obviously it’s very emotional, it’s been a hell of a journey,” he told Sky Sports.

“Eleven years of my life, so much has happened in that, when I look back. You can tell by my voice how much it means to me.

“I’m just grateful for the opportunity to play for this great club and spend so many years.

“I’ve got a family, my wife, my kids, so much has happened, I’m just grateful for the opportunity here.”