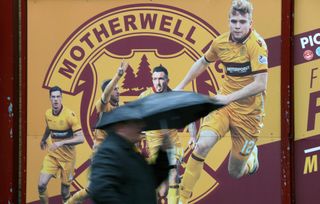 Ladbrokes Premiership games at Fir Park and Ibrox have been postponed as Storm Dennis made an impact on the weekend’s sporting action.

Winds of up to 70mph and up to a month’s rainfall have been forecast for Saturday and, coming off the back of last week’s Storm Ciara, it is presenting issues for clubs and events up and down the country.

Motherwell were set to face St Mirren but, after a 12.30pm pitch inspection, it was decided the game should be called off with the worsening forecast taken into account.

Motherwell v St Mirren has been called off due to the weather conditions.https://t.co/N6LoWVewjjpic.twitter.com/7PcloFCVK7— Motherwell FC (@MotherwellFC) February 15, 2020

Well chief executive Alan Burrows told the club’s official website: “We tried everything possible to get the game on.

“Unfortunately we have suffered from exceptional rainfall throughout the week, and in particular overnight into Saturday which has continued right through into the day. That rainfall is also forecast to continue throughout the time the match was due to be played.

“This is the first postponement we have suffered due to the pitch in over five years. Our groundsman and his staff do an incredible job and have done everything within their power to try and mitigate the need for this match to be called off.”

Rangers were hoping to cut Celtic’s lead at the top of the table to seven points with a win over Livingston, but the contest was cancelled just before 1pm.

Rangers tweeted: “GAME OFF: Today’s @SPFL match against @LiviFCOfficial has been postponed due to the weather conditions. A new date will be announced in due course.”

Rochdale’s Sky Bet League One match at home to Tranmere also fell victim to the weather.

“The fourth official of today’s game has taken into account the height of the water table under the pitch, the surface water on the pitch from the rain already today and the forecast of Storm Dennis, and has therefore decided to call the game off,” said a statement from Rochdale.

Nine of 12 matches in the Vanarama National League have also been postponed, while horse racing at Wincanton was abandoned with the situation being monitored on an ongoing basis in the day’s three other meetings at Haydock, Lingfield and Ascot.