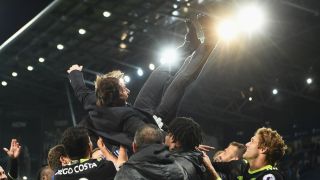 Claudio Ranieri said he is proud to pass the Premier League title onto compatriot Antonio Conte after the Italian guided Chelsea to glory in his first season in England.

Conte restored Chelsea's championship status with Friday's 1-0 win at West Brom, after the Blues finished 10th last term in defence of their 2014-15 crown.

Chelsea's triumph saw Conte become the fourth Italian to win the Premier League, following in the footsteps of Roberto Mancini, Carlo Ancelotti and Ranieri, who stunned the sporting world when he sensationally guided Leicester City to the title last season before being sacked in February.

"I am proud to pass the torch of the Premier League to Antonio Conte: from one Italian to another, a great recognition of our school of management," Ranieri told La Gazzetta dello Sport.

"After the fairytale of my Leicester, this splendid Chelsea adventure. It was not easy to get it at the first attempt, but Conte passed his exam with flying colours on his debut in English football.

"Antonio did a great job in every sense: dealing with the team, his rapport with the outside world and relations with the media.

"Having said all that, the fundamental issue remains the work of the coach."

Chelsea close out their season with visits of Watford and Sunderland to Stamford Bridge before facing London rivals Arsenal in the FA Cup final on May 27.