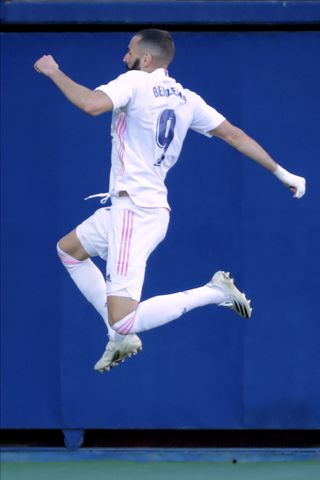 Vinicius Junior and Karim Benzema got the goals as Real Madrid claimed their third consecutive league win with a 2-0 victory over Levante away from home.

Vinicius struck in the 16th minute when he curled in after a corner, while Benzema added a second in the fifth minute of stoppage time.

Levante had hit the crossbar in search of an equaliser but could not avoid a third defeat of the campaign.

The win saw Madrid go into the international break unbeaten with only two points dropped.

Madrid have struggled for goals this season, but there would have been hopes of a more comfortable win when Vinicius gave them an early lead.

When a deep corner found the Brazilian on the left side of the area, he had time to pick his spot to curl a shot beyond Aitor Fernandez.

Levante sought a response and 15 minutes later Nikola Vukcevic headed against the crossbar from a corner.

Madrid’s appeals for a penalty were turned down when Luka Modric went down early in the second half, while Benzema hit the post with a curling shot in the 51st minute as the visitors piled on the pressure.

It was their best period of the game and looked like being rewarded with 68 minutes gone when Sergio Ramos headed in, but the effort was ruled out for offside after a video review.

However, Madrid did get their second deep in stoppage time when Benzema fired home, cutting past a defender before beating the goalkeeper.