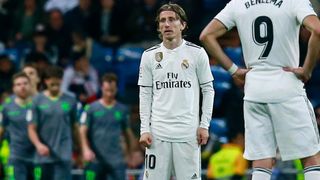 Madrid's LaLiga campaign went from bad to worse at the Santiago Bernabeu, where the Champions League holders crashed to a stunning 2-0 defeat.

Dissecting Madrid's woes, Modric said: "Missing goals and more unity on the field. At home, they're scoring goals on us and we aren't scoring many.

"We have to sit down, talk and to see what is our problem. It's not normal, it's not just one time, this has happened many times. You have to find solutions, lots of players are not performing at their best.

"I have to improve and assume more responsibility. It's a difficult moment for the club but these things have to unite us more."

With pressure mounting on Solari – who replaced Lopetegui in October – Modric added: "The manager is doing a great job but he can't score the goals or stop them at the beginning of the game. He has hope, but we are out there on the field and we have to do better to have more concentration.

"We can't keep cocking up like this in every game. You have to avoid it in the future. We created but we lacked the goal and that's our problem. Solari has our confidence and we won't be looking for excuses with him or blame him."

"I think that we all have to be self-critical," Modric continued. "We have to speak clearly and say it how it is. We can't say we did well and just didn't have luck. The ball isn't going in and we have to see why.

"There are reasons why we are bad and you have to see what they are. We all have to take more responsibility."