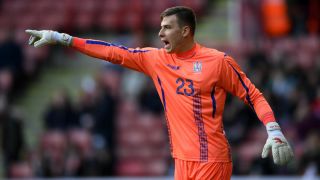 Although neither club has confirmed the fee for the 19-year-old, it is reported to be €14million.

Lunin has already racked up 51 appearances in the Ukrainian Premier League for Zorya and former club Dnipro.

And he will now add to Madrid's goalkeeping options under new coach Julen Lopetegui, competing with last season's number one Keylor Navas for the starting spot.

Lunin, who won the first of his two Ukraine caps in March, has signed a six-year deal at Madrid, the LaLiga club confirmed.

"We thank Andriy Lunin for his efforts for Zorya," the Ukrainian club said in a statement.

"We wish with dignity to accept the challenge of fate and eventually he can become the main goalkeeper of one of the best clubs in the world.

"Thank you, Andriy! Good luck in the new club!"