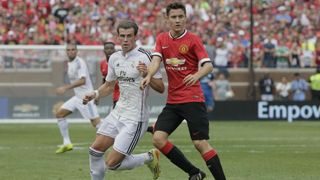 Real Madrid have recorded the biggest revenues in world football for a 10th consecutive season, according to Deloitte's Football Money League.

The Spanish Liga giants claimed a 10th UEFA Champions League crown in 2013/14 and it brought in €549.5 million (£459.5m) off the field - an increase of €30.6m on 2012/13, while the annual study underlined the overall financial might of the Premier League as all 20 English top-flight clubs were represented inside the top 40.

Despite missing out on Champions League qualification and recording a disappointing seventh-placed finish during David Moyes' unhappy season at the helm, Manchester United climbed two places up the Money League to second, swapping places with Real's La Liga counterparts Barcelona.

United's figure of €518m meant they were the only club alongside Real to surpass €500m in revenue, placing them ahead of eight Premier League counterparts in the top 20.

Bayern Munich and Paris Saint-Germain remain third and fifth respectively, with Chelsea, Manchester City, Arsenal and Liverpool - the latter up from 12th - filling the next four spots.

Newcastle United and Everton joined Tottenham inside the top 20, further demonstrating of the impact made by the latest lucrative round of television rights fees in the Premier League.

Turkey's Galatasaray were the only team in the top 20 outside of the five major European leagues - Spain, England, Germany, Italy and France.

Dan Jones, partner in the Sports Business Group at Deloitte, said: "The growth experienced within the top 20 has been remarkable. Although only Manchester United and Real Madrid have gone past the €500m revenue marker so far, we predict that all of the top five clubs may reach that point by next year.

"Commercial and broadcast revenues are now more important than ever to clubs to enable them to compete financially and put the best talent on the pitch.”

On the Premier League’s overall strong showing, Austin Houlihan - senior manager at Deloitte - added: "The fact that all the clubs in the Premier League are in the top 40 is testament to the huge appeal of the league globally and also the equality of the distributions the clubs enjoy relative to their European counterparts."