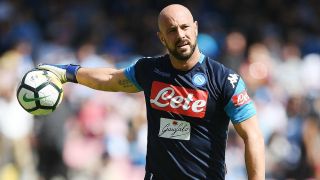 Pepe Reina has been summoned to an Italian Football Federation (FIGC) hearing over his alleged links with the owners of a Naples-based betting agency.

According to a statement released by the FIGC, Reina is said to have maintained a relationship of "friendship and acquaintance", involving the exchange of favours, with the owners of the company.

The announcement of the FIGC disciplinary hearings follows an investigation by the authorities in Naples.

Former Liverpool goalkeeper Reina, 35, is set to leave Napoli upon the expiry of his contract and is expected to join AC Milan ahead of the 2018-19 campaign.

Ex-Napoli and Sassuolo player Paolo Cannavaro has also been summoned to face the FIGC hearing.

Representatives of the two players have been contacted but are yet to comment on the announcement.