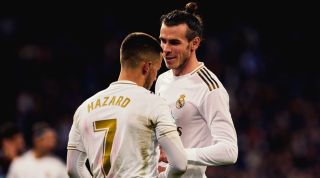 Manchester United are looking for alternatives to Jadon Sancho - and could be prepared to offer a loan deal to Welsh wizard Gareth Bale.

Borussia Dortmund have stood firm on keeping Sancho, who scored for the club last night against Duisberg alongside fellow English starlet Jude Bellingham. With United having seemingly failed in this pursuit, they are now turning towards other stars.

One such name is Real Madrid outcast Gareth Bale. The Welshman is unwanted in the Spanish capital and with United offering a short-term deal - starting with a loan - it's thought that Zinedine Zidane is open to letting the former world record signing leave the Bernabeu.

Bale is yet to be convinced, according to reports. He would welcome a move back to the Premier League, but not with a loan. United could end up tempting him with high wages, however.

United have long been admirers of Bale's - as far back as his Tottenham Hotspur days - and have considered blockbuster moves for him in the past. Now though, it seems like the Red Devils could acquire their man for around £20m, with Real looking to raise capital.

Bale is 31 now. For a footballer who relied so much on his physicality at his peak, it is perhaps understandable that Ed Woodward is unwilling to commit to a long-term move for the wide-man.

Were Bale to rekindle anything close to his best form at United, however, he could be a big asset to the side. At the very least, his power and drive from the right-wing would be a great alternative to Mason Greenwood.

United are also apparently keen on signing Sergio Reguilon from Real Madrid, with Los Blancos already stocked in that position, having Marcelo and Ferland Mendy as options. Sevilla, who Reguilon played on loan for last season, have just purchased Marcos Acuna from Sporting Lisbon - seemingly ending the chance for the Real defender to go back there again this season.

PREDICTED! FourFourTwo writers pick the players, managers, flops and signings of the season

Real could well be in for Jadon Sancho come next summer, vying with United for his signature. Apparently, United are concerned about the increased competition for the youngster's signature should they fail to secure him before October's transfer deadline, with some of the biggest clubs in Europe interested in his services.

It's likely that Ole Gunnar Solskjaer's side will be linked with more names in the final weeks of the window. Their only acquisition so far is Donny van de Beek from Ajax.

FFT INTERVIEW 'We tried to get Timo Werner at Tottenham': Former Spurs scout has his say on Chelsea's new signings