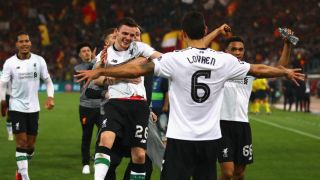 Andrew Robertson feels Liverpool being viewed as outsiders against Real Madrid in the Champions League final can work to their advantage.

Jurgen Klopp's team survived a late brace from Radja Nainggolan that handed Roma a 4-2 win on Wednesday at the Stadio Olimpico – a result that was not enough to prevent Liverpool from progressing 7-6 on aggregate.

Nainggolan's error in the ninth minute had a greater influence on proceedings, allowing Sadio Mane to extend Liverpool's overall advantage and Georginio Wijnaldum restored their lead on the night after James Milner unwittingly scored a freak own goal.

Edin Dzeko equalised and led the charge for Roma, but their closing salvo proved too little, too late.

"Credit to all the lads. We've come through every challenge we've been set so far," Robertson told BT Sport.

"The lads and the fans deserve it. We'll have a great day in Kiev regardless of the result.

"They threw everything at us, but the lads have done brilliantly. "

Robertson has established himself as Liverpool's first-choice left-back less than a year after joining from relegated Hull City.

As such, the prospect of tangling with Cristiano Ronaldo, Gareth Bale and the rest of Zinedine Zidane's star-studded line-up is one he will relish.

"You look back at what I was doing last season, fighting for our lives at Hull and sadly we finished short," he added, with the Reds' sights now fixed on trying to halt Madrid's bid for a third consecutive title.

"This season I've had to take my time, but now I feel at home. I'll certainly enjoy Kiev.

"We'll enjoy this tonight and maybe think about Ronaldo another day.

"They've dominated the Champions League. We'll go in as underdogs, but maybe that can be a good thing."