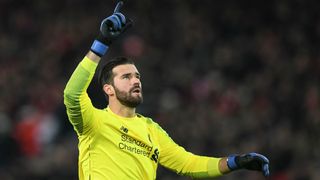 Andrew Robertson insisted Liverpool goalkeeper Alisson should not be too despondent over his error against Manchester United on Sunday given his form this season.

The Brazilian allowed United back into the game at Anfield when he spilled Romelu Lukaku's cross into the path of Jesse Lingard to score the equaliser.

However, a brace from substitute Xherdan Shaqiri ultimately meant Alisson's blunder did not cost Jurgen Klopp's men as they returned to the top of the Premier League with a 3-1 victory.

"He has been unbelievable this season and we all make mistakes," Robertson told several national newspapers.

"It is just if Mo Salah or [Roberto] Firmino make a mistake it maybe doesn't get punished because it is up the other end, but that is unfortunately what a keeper has to put up with. If they make a mistake it usually turns into a goal.

"Of course he will be disappointed with it but he bounced back and we can't moan about it. He has dug us out, we are still in the Champions League because of him.

"We have not dug him out of a hole but we have put in a performance and his error hasn't been highlighted because we have won the game and that is what a good squad does."

Liverpool are the only unbeaten team left in the Premier League and they have a one-point advantage over reigning champions City at the top of the standings.

Robertson has been impressed with how Klopp's side have continued to pick up victories over a testing period and has urged his team-mates to maintain their form heading into the busy festive period.

"We are in December, we know how tough this period is but we are top of the league," he added.

"We have just got to keep going. We know how good Man City are, we have a bit of a gap that has opened up now to third. The two of us are close to each other but we believe we can stay top.

"There is a long way to go and we still have to play big games, starting on Friday night, and we hopefully move on from there.

"It has been a huge few weeks. People maybe looked at the fixtures and thought, 'Everton, it's a derby, always tough, Bournemouth, always tough, Napoli was a must-win and Man United speaks for itself'.

"We have come out unscathed but we can't just rest on that and take our eye off the ball. We need to stay focused 100 per cent and look forward to the challenge at Wolves, who have done well this season. We'll rest and get ready for another big one."