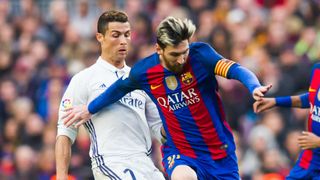 Ronaldo is expected to retain his title as the FIFA Best Men's Player at a ceremony in London on Monday, despite Barca superstar Lionel Messi turning in another stellar year himself.

Debate over which of the current generation's standout players is superior is set to endure for some time yet, although Zidane sought to state a decisive case in favour of his own player after Sunday's 3-0 win over Eibar in LaLiga.

"Ronaldo is the best of his generation by far," he said. "He's already showed that several times because he's always shown up in important games. He always makes the difference.

"The award he's going to win is most deserved; all the trophies he's winning are well deserved."

Champions of Messi's cause will point to their man scoring 11 times in the opening nine matches in LaLiga this term to fire Barcelona to the top of the table, while Ronaldo - who helped Madrid to become Spanish and European champions last term - has managed a solitary strike in five top-flight outings.

Nevertheless, speaking ahead of Tuesday's Copa del Rey trip to Real Murcia, Valverde was unwilling to stir the pot any further.

"It's just an opinion like everyone else's," he said of Zidane's proclamation.

Messi, also in London for the FIFA gala, is one of a host of Barcelona first-team players set to sit out against third-tier Murcia.

Valverde confirmed striker Luis Suarez would rest up, with a combination of youth players and fringe first-team members to be deployed.

Valverde: "There'll be lineup changes against Murcia & Barça B players who can help. But we want to win." October 23, 2017

Of the latter group, however, full-back Aleix Vidal and attacking midfielder Arda Turan are sidelined due to injury.

"The two are discounted for tomorrow," Valverde explained. “Arda, he got the medical all clear the other day and then he had a relapse with the same problem [foot].

"With Aleix, he had a problem with his ankle – the one he had an operation on last season. He's had a few problems with that."

On Vidal, he added: "Do we have to be worried? I'm not a doctor, you'll have to clear this up with the medical services.

"He's recovered fantastically well but he has a small problem. I think it will be able to be resolved."