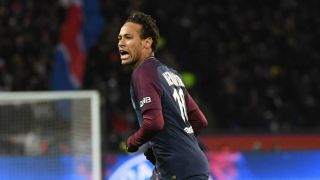 Neymar does not have to leave Paris Saint-Germain to win the Ballon d'Or, according to his fellow Brazilian Ronaldo.

Neymar has thrived since becoming the world's most expensive footballer by making a €222million move to PSG from Barcelona in August, scoring 18 league goals to put his side in a dominant position at the top of the Ligue 1 table.

Real Madrid president Florentino Perez has suggested Neymar will not be able to win the Ballon d'Or he craves if he stays at PSG, with the Champions League holders continuing to be linked with the forward.

But Ronaldo - winner of the Ballon d'Or in 1997 and 2002 - believes Neymar can stand out enough at PSG, who face Madrid in the Champions League this month, to earn the individual accolade.

"He has everything to win the Ballon d'Or in Paris," former Madrid striker Ronaldo, speaking at Neymar's birthday party on Sunday, told SFR Sport.

"There are clubs that I would have liked to play at. One of the main ones is PSG.

"I have come many times to Paris, my life has been so many times in this city that I feel Parisian, but I never had this opportunity.

"I never had a proposal, I played in great European clubs but my career only took me to Italy, Spain and Holland."

Madrid will have stop Kylian Mbappe, as well as Neymar, in their Champions League tie with PSG - and Ronaldo says the France international reminds him of himself.