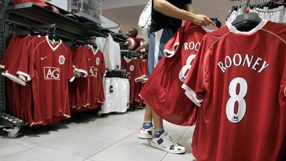 Global sales data from Sporting iD, who determined the top five by the number of player names sold for official replica shirts, said it was a close race for the top three positions.

Rooney edged out Liverpool's Steven Gerrard and Chelsea frontman Fernando Torres, who may go up in the popularity stakes after hitting a hat-trick in the 6-1 Premier League win over Queens Park Rangers on Sunday.

Cristiano Ronaldo, formerly with Manchester United and now with Real Madrid, is the fourth most popular over the 20 seasons of the Premier League, with Chelsea's Frank Lampard fifth.

"He truly went into a league of his own in 2007 when Ruud van Nistelrooy vacated the Manchester United number 10," he said.

"That's the shirt of one of Wayne's heroes, Denis Law, and of course 10 is the fabled number of Pele and Maradona. Add to that Rooney's incredible performances and popularity then, it's no surprise that there's such global demand by fans for his name."