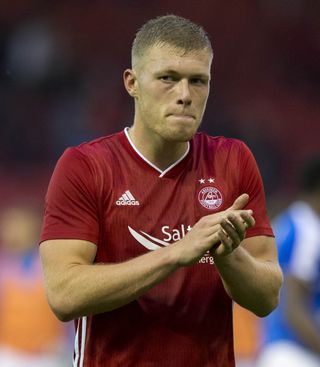 The Dons boss was left in a sweat after seeing last season’s top scorer Sam Cosgrove ruled out for up to 10 weeks with a knee injury while Curtis Main is also unavailable with a thigh strain, meaning Edmondson’s arrival ahead of the Gers clash is perfectly timed.

Ash Taylor (hamstring) and Shay Logan (calf) are also back in contention while Jonny Hayes could make his second debut for the club against Steven Gerrard’s team after returning from a spell at Celtic.

Alfredo Morelos will travel to Aberdeen with the Rangers squad despite continued speculation over the striker’s future.

The Ibrox side have rebuffed an opening £13million offer from Lille amid reports the Colombian has agreed personal terms with the French giants.

His availability is all the more important to Steven Gerrard ahead of the Pittodrie clash given Jermain Defoe (hamstring) is out of action. Steven Davis (Achilles) is also injured but should be fit to face Bayer Leverkusen next week, while summer recruits Leon Balogun, Calvin Bassey and Jon McLaughlin are vying for a place.