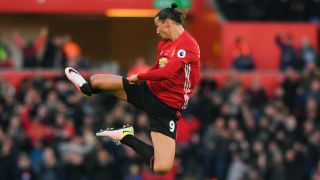 Louis Saha has backed Zlatan Ibrahimovic to help galvanise and lead Manchester United to trophies when he returns from a knee injury.

Ibrahimovic is back at Old Trafford after signing a one-year contract last month, having initially not been offered a new deal at the end of last season following a serious knee ligament injury.

The 35-year-old striker had been tipped to make his return to action January but his inclusion in United's squad for the Champions League group stage suggests he could be available before the New Year.

And former United forward Saha is relishing Ibrahimovic's comeback as Jose Mourinho's men seek to bring the Premier League title back to the club for the first time since 2013.

"Ibrahimovic is an immense player who will galvanise the squad during the second half of the season," Saha – the founder of Axis Stars, a network for players – told Omnisport.

"Competition for places within the squad is great.

"Leadership is vital to win trophies like the Premier League and Champions League.

"I cannot wait for him to resume playing again at Old Trafford."

Ibrahimovic has already been warned he must earn his position in Jose Mourinho's line-up, despite scoring 28 goals in all competitions last season.

His goals helped United to Europa League and EFL Cup glory in 2016-17 but £75million signing Romelu Lukaku is now leading the line.

Led by Lukaku's league-best three goals, United have made a stunning start to campaign, winning their opening three matches with 10 goals scored and none conceded.

"Lukaku is the player who can score 25 goals a season but he is also capable of scoring the very decisive ones," the Frenchman added.

"He is a very important element, as much as [David] De Gea and the quality of the bench to win a title."