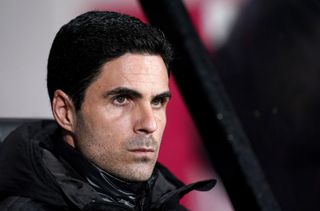 “Mikel’s trying to bring back the philosophy, the Arsenal passing way and I feel like we played really good football in the first half,” said Saka.

“We played some good bits of football and the goal obviously was very good.”

Arsenal manager Arteta hailed Saka for grafting hard to grasp the extra defensive responsibility required to thrive at left-back, though the Cherries were so poor in the opening half-hour that the Gunners were hardly on the back foot.

Sam Surridge claimed a consolation goal for the hosts in added time but Arsenal strolled through without issue to book a fifth-round tie at Portsmouth.

“That’s the situation now because we don’t have any left-backs at the moment,” said Arteta, of Saka’s shifting into defence.

“What I like is that he’s put his head down, it’s not his favourite position to play, but we try to adapt him with his qualities to play him as much as possible in the position that he likes.

“But then he is very willing to learn all the defensive principals that we are asking him to do and his attitude is very good.”

“We train a lot together and we speak a lot and we’re good friends,” Saka told Arsenal’s official club website.

Deflated Bournemouth boss Eddie Howe refused to shy away from the enormity of Saturday’s Premier League clash with Aston Villa at the Vitality Stadium.

Bournemouth could climb out of the relegation zone with a much-needed win and Howe is in no mood to sugar-coat the Cherries’ situation.

“We know how big this game is, I don’t think we need to build it up internally,” said Howe.

“We’ve got to back ourselves to perform better than we did against Arsenal.

“We did it against Brighton (in the 3-1 Premier League win) and we’ll need another performance.”